There are many Torah Jews who live in Jerusalem and around the world, who believe that the world must know that the Zionists have illegitimately seized the name Israel and have no right to speak in the name of the Jewish people!

They believe that contemporary sovereignty over the Holy Land belongs to those who have lived there for centuries, the Palestinians.

They seek the return of all Palestinian refugees to their rightful land.

They seek to live in the land of Palestine as anti Zionist Jews. To reside as loyal and peaceful Palestinian citizens, in peace and harmony with our Muslim Brethren. Just as their ancestors lived in Palestine for centuries before the usurpations of this tragic century.

They believe that the Zionist state of Israel is illegitimate in the eyes of God and that it DOES NOT represent Jews or Judaism.

They are persecuted by the Zionists, as are the Palestinians, and we should be praying for them.

You can read more about them at these websites:

The Jesuits of the Roman Catholic Church have created the modern state of Israel to be able to position their False Messiah, as Jerusalem is the connecting point of the world’s three major religions.

The Pope will visit Israel in 2014 and may help broker a peace deal, to supposedly solve the tension between Muslims and Israel.

This will also deceive Christians into thinking the rapture will take place soon.
Read The Pretribulation Rapture Myth

The Pope may relocate to Jerusalem, as it is center stage in their end times deception plan.

97% of the people who call themselves Jews are not descendents of Abraham, so it is a false premise that they should possess the land. Read Jews Who Are Not Really Jews

The regathering of Jews in Jerusalem already happened before Jesus first coming, so there is no need for a future regathering.  Read Regathering Of The Jews Deception

Regarding the six-sided hexagram on Israel’s flag, read The Star Of David Deception 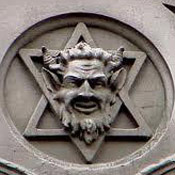