Best-selling author Jonathan Cahn has been called America’s prophet, but you will soon learn that his prophecy explanations are wrong, and are deceiving people.

I read The Harbinger: the Ancient Mystery that holds the secret of America’s Future and believe that it is fiction, and not true fulfillment of prophecy.

He based the whole book on Isaiah 9:10, where the House of Israel made a defiant statement to rebuild after the Assyrians attacked them.

Isaiah 9:2 speaks of a light that will shine upon Zebulun and Naphtali.  That light is the coming Messiah, Jesus.

“The people who walked in darkness Have seen a great light; Those who dwelt in the land of the shadow of death, Upon them a light has shined. You have multiplied the nation And increased its joy; They rejoice before You According to the joy of harvest, As men rejoice when they divide the spoil.”

Isaiah 9:6-7 foretells the coming of the promised Messiah.

“For unto us a Child is born, Unto us a Son is given; And the government will be upon His shoulder. And His name will be called Wonderful, Counselor, Mighty God, Everlasting Father, Prince of Peace.  Of the increase of His government and peace There will be no end, Upon the throne of David and over His kingdom, To order it and establish it with judgment and justice From that time forward, even forever. The zeal of the Lord of hosts will perform this.”

When you read Matthew 4:13-16, it says that the first place that Jesus ministered was in Zebulun and Naphtali, the very places mentioned in Isaiah 9, the very places that were attacked first by the Assyrians.

“And leaving Nazareth, He came and dwelt in Capernaum, which is by the sea, in the regions of Zebulun and Naphtali, that it might be fulfilled which was spoken by Isaiah the prophet, saying: “The land of Zebulun and the land of Naphtali, By the way of the sea, beyond the Jordan, Galilee of the Gentiles: The people who sat in darkness have seen a great light, And upon those who sat in the region and shadow of death Light has dawned.”

This is the area where Jesus, the Light of the World, found and called His disciples. That tells me that God was not upset by their statement in Isaiah 9:10, which is the basis of the story of the Harbinger.

The whole premise of his Harbinger book is flawed, because it is about the House of Israel, and the coming Messiah, Jesus; and it has nothing to do with 9/11 or America.

God did not cause 9/11, the Jesuits who control the CIA and Israeli Mossad did, to push the world towards their New World Order.

Jonathan Cahn has a new book called The Mystery of the Shemitah: The 3,000-Year-Old Mystery That Holds the Secret of America’s Future, the World’s Future, and Your Future!

It’s funny, most Christians don’t believe that the laws which were given in the Old Testament apply anymore, but they are buying into what Jonathan Cahn is teaching about the Shemitah, hook, line and sinker.

The Shemitah is the concept of giving the land a rest every 7 years, and if that doesn’t happen, then God will cause calamity.

Let’s be clear. The Schemitah was given to the Israelites to observe in the land which God gave them.  It does not apply to America.

He associates a pattern of financial collapses in the United States with the Shemitah. Of course in 2008, there was the housing collapse, which was caused be the Jesuits who control the major banks and financial institutions.

And he is warning that there will be a collapse in 2015 because of the Shemitah. I believe that the U.S. economy will collapse in September or October of 2015, but I do not believe it is the hand of God.

Jonathan Cahn said that “nobody could time the market so perfectly” as to match up with the 7-year cycle.  Really?

We know that the Jesuits of Rome control all of the financial institutions and the economy will collapse when their Federal Reserve raises interest rates, causing the quadrillion dollar derivatives market to crash. And maybe that is part of God’s judgment on us.

What Jonathan Cahn is doing is deflecting blame away from the Jesuits of Rome, the earth beast of Revelation 13, which control the world; and he is putting it directly on God.

If he really knew what he was talking about, he would be pointing his finger at the Society of Satan, which is fulfilling the prophecies in Revelation 13, 16 and 17.

And he said that America’s sins will lead to the destruction of Israel.

If Israel gets destroyed, it will be because it is a pagan nation, not because of America. If God really is behind the nation of Israel, He can protect it just fine without America’s help.

But let’s be clear about something…

It is the strategy of the Jesuits to cause a global economic collapse, to usher in their New World Order.

All the while, they will point to Jonathan Cahn’s book, and point to the God of the Bible as the cause of the financial collapse, making people hate Him and Christians all the more.

It’s ironic that most Christians don’t believe that they need to observe the Saturday Sabbath or the seven Holy Feast Days of God, which are to all of His followers…

But they believe Jonathan Cahn, maybe just because he is Jewish rabbi.

Follow the teachings of the Word of God, not a Jewish Rabbi.

That applies today as well as it did 2,000 years ago, when the Jewish Rabbi’s were misleading the people.

Our Messiah said to not call anyone Rabbi, which Michael Cahn should know, but he accepts the title from men anyway.

“But be not ye called Rabbi: for one is your Master, even Christ; and all ye are brethren.” Matthew 23:8

The Scriptures tell us not to cover our head, yet Rabbi Cahn does exactly that, honoring his Talmudic Jewish beliefs over the Holy Scriptures.

“Every man praying or prophesying, having his head covered, dishonors his head. For a man indeed ought not to cover his head, since he is the image and glory of God...” 1 Corinthians 11:4,7

Rabbi Cahn also uses the “V” hand sign, which he states is a symbol of blessing. The V hand sign represents the Hebrew letter, Shin. Its display is part and parcel of Jewish religion. It’s part of a Kabbalistic occult ritual.

Many Jews revere the Egyptian Kaballah. Rabbi Cahn has made references to the Zohar, which is used by Kabbalists.

Gershow Scholem (1897-1982), Professor of Kabbalah at Hebrew University in Jerusalem, said that the Kabbalah contains a great deal of black magic and sorcery, to invoke the powers of devils to disrupt the natural order. 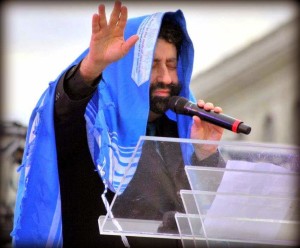 Kabbalism is Satanism because it says God is formless and unknowable, not even part of the universe. The essence of Satanism is to deny God. Virtually all of the great witches and sorcerers of this century were Kabbalists.

This version of the “V” salute is a greeting by Rabbis in the Hebrew tradition. The hand split down the center represents the 2 letters on each side of the “V” in deVil, as the initials DE and IL represent the fingers.

Related Study: Torah Jews Believe That The State Of Israel Is Illegitimate

69 thoughts on “Jonathan Cahn Is Deceiving You”