If you’re a flat earther, have you studied the context of the verses which are being cited to proclaim that ‘the Bible says flat earth’? 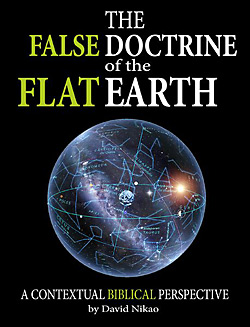 This book goes through the 240 flat-earth verses that people like Nathan Roberts cite, to show you the proper context; because if you’re promoting these verses, then you’re accountable for the explanations.

If you know someone who believes that the Bible describes a domed, flat earth; I will help you understand their rationale in citing these verses.

If you’re a believer who’s researching the flat earth, this book is critical for you.

If you believe in the heliocentric universe, have you read what Moses, Job, David, and Isaiah; declared about the earth, the sun, and the stars?

None of my pastors taught me what Scripture says about astronomy.

The cosmology that’s described in Scripture may surprise you.

It’s intellectually dishonest for people to not include the Tychonic geocentric globe earth model as an option in this discussion.

Has the enemy created a false dichotomy, by making the debate only between the flat earth and the heliocentric globe earth?

Satan is using the deception about the design of the universe and earth, to attack the authority of Scripture, to discount the Genesis creation narrative, and to promote the lie of evolution.

This book is about much more than the flat earth debate.

It’s a Bible study which will open up your eyes and show you how the stars, which our Heavenly Father calls by name, are declaring the redemption plan of the set-apart. HalleluYah!

For more information, click on The False Doctrine of the Flat Earth book by David Nikao