The Jesuits are the earth beast of Revelation 13, who are using the Roman Catholic Church to draw the world under their power.

Pope Francis, the first Jesuit Pope, will address a joint session in Congress on Sept. 24 during his visit to the United States, House Speaker John Boehner (a Roman Catholic) announced Thursday. This will be the first time that a Pope of Rome has done so.

“We are humbled that the Holy Father has accepted our invitation,” Boehner said during his weekly press conference. In a follow up statement, he said, “In a time of global upheaval, the Holy Father’s message of compassion and human dignity has moved people of all faiths and backgrounds. His teachings, prayers, and very example bring us back to the blessings of simple things and our obligations to one another. We look forward to warmly welcoming Pope Francis to our Capitol and hearing his address on behalf of the American people.”

“The American people look forward to hearing Pope Francis’ call to love our neighbors and to find new and creative ways to meet the pressing needs of those who exist on the fringes of society. From the slums of Buenos Aires to St. Peter’s Square, Pope Francis is moving the hearts of millions and inspiring a new generation with an engaging and compelling style.“

Let’s be clear. There is no separation of Church and State.

The Jesuits of Rome control the President and Congress.  They control Washington D.C., which is a city-state corporation.

Before the Constitution and the Bill of Rights, America was 98% Protestant, as they had fled from the persecution of the Roman Church. They forbid Catholics from practicing their Babylonian Eucharist Mass. They forbid them from voting.

Then the Jesuits helped create the 1st Amendment, which gave them freedom to practice their religion. Since then they have flooded America with Catholics during immigration. The borders of Mexico, which is 95% Catholic, are open.

Since the founding of this country, the Jesuits have taken complete control of the United States government, intelligence agencies and military, and monetary system with their Federal Reserve Bank and IRS.

Thomas Jefferson, 3rd President of the United States, said of them;

“I do not like the late Resurrection of the Jesuits. They have a General, now in Russia, in correspondence with jesuits in the U.S. who are more numerous than everybody knows. Shall We not have Swarms of them here? In as many shapes and disguises as ever…. In the shape of printers, Editors, Writers, School masters, etc. If ever any Congregation of men could merit, eternal Perdition on Earth and in Hell… it is this Company of Loyola.”

The fasces had its origin in the Etruscan civilization, and was passed on to ancient Rome, where it symbolized a magistrate’s power and jurisdiction.

The image has survived in the modern world as a representation of magisterial or collective power. It represents Rome’s power and jurisdiction over America. 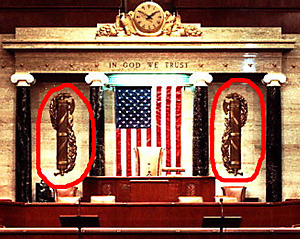 The fasces frequently occurs as a charge in heraldry, it is present on an older design of the United States ten cent coin and behind the podium in the United States House of Representatives, it is used as the symbol of a number of Italian syndicalist groups, including the Unione Sindacale Italiana, and it was the origin of the name of the National Fascist Party in Italy (from which the term fascism is derived).
.The Roman Fasces symbols surround the Statue of Freedom, which sits on top of the Dome of the United States Capitol.

And now the Jesuit Pope is coming to address Congress. Oh how far we have fallen!

2 thoughts on “Jesuit Pope Francis To Address The U.S. President And Congress On September 24 2015”