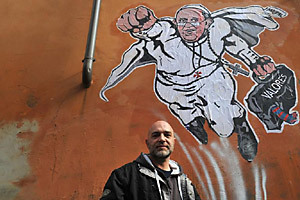 Pope Francis is not being portrayed as Superman, flying through the air with his white cape billowing out behind him.

Italian street artist Maupal poses next to his mural showing Pope Francis as a superman in downtown Rome near the Vatican. (AFP Photo/Tiziana Fabi)

With his first raised as his cross swinging in the air, with the Celtic cross on his waist, he speeds forward in the air, carrying his trademark black bag, with the word “values” written across it, in Spanish.

It looks like there is an arm or leg reaching out of the bag. What do you think that represents?

The Pontifical Council for Social Communications from the Holy See tweeted, “We share with you a graffiti found in a Roman street near the Vatican.”

Pope Francis uses Twitter to post tweets on his own feeds in nine languages, with more than 10 million people following him.

If you’ve read our Antichrist In The Temple Deception and The Antichrist Is Hidden In Plain Sight studies, then you know that the Roman Catholic Church is the Antichrist beast of Revelation, and the Pope, the Son of Perdition.

The Jesuits are positioning the Pope in front of the masses, to draw the world to the him, as we head towards the grand deception of the end times.

To see the truth, read the End Times Deceptions home page, which explains what the Bible says about the Roman Catholic Church and the Pope.