The End Times Deceptions studies are a result of the Holy Spirit revealing many truths to me during the last two years.

Much of the information on this website has been taught for 1,800 years by the great theologians, and it’s only been during the last few centuries that Messiah’s Church has lost the truth about prophecy fulfillment.

In 2 Timothy 4:3-4 Paul warned us, “For the time will come when they will not endure sound doctrine, but according to their own desires, because they have itching ears, they will heap up for themselves teachers; and they will turn their ears away from the truth, and be turned aside to fables.”

Up until a few years ago, I was a Christian who simply believed what my Pastors had taught me about the end times.

They’ve been to seminary, so surely they knew the proper explanations to prophecy.

There was no reason to doubt them…

Until the Holy Spirit started me on a journey that revealed how the Bible explains prophecy fulfillment, which is contrary to many of the teachings from Pastors today.

The Spirit put on my heart to look to theologians who had not been corrupted by all of the deceptions, which have really taken hold during the last century.

The best tool that the Spirit put in my path is SwordSearcher Bible software, as it gives me easy access to Bible commentaries from the top Bible scholars of the 1700 and 1800’s, such as:

I am blessed to stand on the shoulder of these great theologians, who have taught me so much about the Word of Elohim.

You can find some of their commentaries at www.studylight.org/com/ but SwordSearcher let’s you quickly read through all of the commentaries about a particular passage. And it gives you the Strong’s word listing, a Bible dictionary and much more.

Other people who Elohim has placed in my life during the past few years are:

Henry Grattan Guinness, who wrote Romanism and the Reformation: From the Standpoint of Prophecy which gives the explanation for the prophecies in Daniel, in 2 Thessalonians 2, in John epistles and Revelation. It’s an excellent study that exposes The Holy Roman Empire and it’s role in end-times Bible prophecy. Click here to read it online.

Ralph Woodrow’s book Great Prophecies Of The Bible covers the second coming of Christ, Matthew 24, the 70 weeks of Daniel and the antichrist.  Highly recommended reading!

Pastor Samuel Pestes, who wrote “The Stonecutter’s Bride“, “Ancient Nation’s Rise To Strike Again“, and “Abraham’s Message To The 21st Century“; Pastor Sam has had a great impact on my beliefs about the 70 Weeks of Daniel prophecy, and Jesus New Covenant as the fulfillment of the Everlasting Covenant that God made to Abraham.

Robert Carignola’s book “The Present Reign Of Jesus Christ” explained much of the fulfillment of Revelation.

Phillip Mauro’s study “The Seventy Weeks and the Great Tribulation” taught me so much about the fulfillment of the 70 Weeks of Daniel prophecy, the prophecy in Daniel 11 and 12, and Jesus’ Olivet Discourse.

Charles A. Jenning’s book “The Book Of Revelation: From An Israelite And Historicist Interpretation“

Victor McGowan’s book “The Revelation and the History of Christendom: Prophecy Fulfilled to the End of Our Time“

I’ve spent many hundreds of hours reading through many books and commentaries, listening to many audios, and watching many videos.

Some Bible commentaries, such as from John Gill, are extremely detailed and long.

Most people are too busy to read these books and watch the videos, so the Spirit uses me to make the explanations more concise and easy to read.

The goal of this website is to teach how the Bible defines prophecy terms, and to show the fulfillment of many of the prophecies.

The best way to detect a fake Dollar Bill is to know the real thing so well, that the fake ones are easy to spot.

The same is true with prophecy. When you diligently study the Bible, so that you know how it defines terms and how it reveals its fulfillment; when a Pastor is teaching contrary to these things, you know that they are teaching false prophecy.

So who am I and what gives me the authority to teach these things?

I am not Seventh Day Adventist, though I have learned from some SDA teachers who diligently study prophecy.

I grew up in a Christian family and attended Baptist Churches during the early part of my life.  And then was attracted to the verse-by-verse studies at Calvary Chapel Churches.

But today I am not part of any denomination, as during the last few years the Spirit has led me to understand that most of what my Pastors had taught me is not Scriptural.

That includes their futuristic prophecy explanations; but it also includes the observance of pagan Christian holiday such as Easter and Christmas, which the enemy created to replace the Father’s seven Holy Feast Days, which Messiah is fulfilling to redeem His set-apart people.

That includes learning that the King James and other Bible version replaced the personal covenant name of the Father, Yahuah; with God and Lord.

That includes learning that the name Jesus is the Greek variant of the name of the Messiah of Roman Christianity, but His true name is Yahusha, which means ‘Yahuah saves’.

You can read about that part of my learning journey on the The Falling Away of 2 Thessalonians 2 study series.

I don’t call myself a Christian anymore, just a follower of the Father, Yahuah and His Son, Yahusha.

Note: This End Times Bible Prophecy website uses King James verses with God and Jesus, because the point of this website is to teach prophecy fulfillment.  If I use the names Yahuah and Yahusha, that just gives people a reason to click away, and then they don’t learn anything.

Links are provided to The Falling Away of 2 Thessalonians 2 so the Spirit can guide them to that truth when they are ready to receive it.

There are a lot of deceptions exposed on this website, and I’ve found that you can’t overwhelm people all at once.  I trust the Spirit to guide them.  And thankfully, many are waking up to these truths!

I have not been to seminary or a Bible school.

I am simply a child of the Most High , who has the Holy Bible as my guide and His Spirit as my teacher.

I have committed my life to learning and teaching His truth about prophecy, and I work full-time in this ministry.

I believe that the Father shows me many insights because I hunger to know truth, so that He is glorified and the enemy is defeated.

Proverbs 2:1-5 says, “My son, if you receive my words, And treasure my commands within you, So that you incline your ear to wisdom, And apply your heart to understanding; Yes, if you cry out for discernment, And lift up your voice for understanding, If you seek her as silver, And search for her as for hidden treasures; Then you will understand the fear of the Lord, And find the knowledge of God.”

If you’ve read the home page, then you know that most of the deceptions have been created by the Jesuits, to deflect blame away from the Roman Catholic Church and to deceive Christians about the end times.

When you read the study titled End Times Antichrist Deception you will learn that most seminaries are teaching prophecy fulfillment concepts that hide the Antichrist.

And the leaven of these false teachings spreads around to Pastors and Christians, so that the majority are deceived.

One of my other website, www.RomanCatholicBeliefs.org, gives a concise summary of how the Roman Catholic Church is the subject of most Bible prophecy fulfillment.

Popes have proclaimed to be God, to forgive sins, and that salvation is only through the Catholic Church.  They have killed over 100 million Christians during the Dark Ages and the Inquisition.  And the Jesuits seek to push the world into a New World Order where everyone will worship their False Messiah.

Jesuits priests are spread around the world, and have deceived 1.2 Billion Catholics into believing in a false salvation by works through the Catholic Church.

And because Messiah’s Church doesn’t understand that the Roman Catholic Church is Mystery Babylon the Great, the Mother of Harlots, they are not evangelizing Catholics to call them out of the Church and into true salvation through Messiah alone.

In Revelation 3:19-21, Messiah chastises the end-times church, proclaiming that they’re lukewarm, wretched, miserable, naked, poor, and blind. Then He gives us the promise:

As many as I love, I rebuke and chasten: be zealous therefore, and repent. Behold, I stand at the door, and knock: if any man hear my voice, and open the door, I will come in to him, and will sup with him, and he with me. To him that overcomes will I grant to sit with me in my throne, even as I also overcame, and am set down with my Father in his throne.

The word ‘overcomes’ in Greek is nikao. It means to conquer, to overcome, to prevail, to get the victory.

Ever since I began my studies of Revelation, and read that passage, I’ve felt that the name Nikao defined my ministry, for my calling is to teach the fulfillment of prophecy, and to expose the deceptions of the enemy. That is how we conquer the enemy and get the victory!

So when I created a Facebook profile for ministry, I used the name Nikao, because I don’t make Facebook about me. I don’t post selfies, I don’t make posts about my life. I focus on overcoming the enemy, by teaching prophecy fulfillment. When I started posting YouTube videos, I used that name.

It’s the name that I resonate with more than my given name, especially since I don’t have children, so my real name won’t be passed on. But I don’t want to mislead anyone about who I am. I hope that my work brings honor to my father and mother, who blessed me so much by teaching me about our beloved Messiah.

My friend, I encourage you to be a Berean and search these things out, don’t take my word for it, don’t seek to defend a position, just seek the truth.

Because until the Church understands the grand deception that has blinded her, she is unable to fight to overcome the enemy in the power of the Word.

My heart breaks for Christians as they have been so deceived, and have no clue about how the future is going to play out, so they are like the foolish virgins who are unprepared for Messiah’s return.

My tears are shed for Pastors, who are unknowingly teaching the prophecy concepts of the Antichrist, for they will be held accountable for misleading their flocks.

I pray to our Heavenly Father in the power of Messiah’s name that He will give you eye salve to see the truth.

106 thoughts on “About End Times Deceptions” 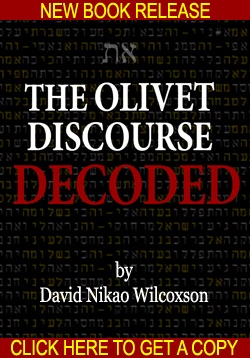