This End Times Deception Bible Study focused on the 7 kings mentioned in Revelation 17.

Recently, I’ve noticed on Facebook that quite a few people are promoting a false view about the prophetic fulfillment of the 7 kings of Revelation 17, saying that it points to the last Popes of Rome.

WorldsLastChance.com is promoting this concept and I see many Seventh Day Adventist’s also promoting it.

Here is a graphic of their explanation of the 8 kings of Revelation, which includes the 8th king, Pope Francis: 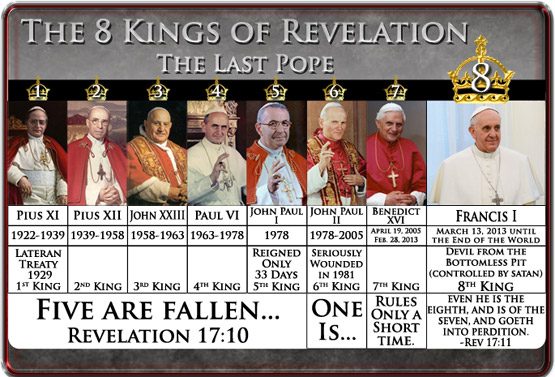 To make their explanation work, they say that John was magically transported into the late 20th century, into a time when Pope John John II was leading the Roman Church, as the king who is.

But the text does not say that John was transported into the future; it simply says that he was taken in the spirit into the wilderness.

They say that Popes became kings in 1929 A.D.; that five Popes “are fallen” since then; that John Paul II was the King “that is“; that Pope Benedict was the 7th who ruled for a short time; and that Pope Francis is the 8th king.

The 5th Pope, John Paul I, reigned for only 33 days, so that would have been the king who ruled for a short time, not the 7th who ruled for almost 8 years.

The Lateran Treaty of 1929 A.D. recognized the Vatican as an independent state, but Popes have not been referred to as ‘kings’ since the treaty, so the whole premise of the explanation is flawed.

Besides that, Popes have proclaimed to be king of heaven, earth and the underworld since the 12th century.

The major flaw in their explanation is that all of Revelation is from John’s perspective, in the latter part of the 1st century.

At that point in time, five kings would have fallen already, one existed at the time, a seventh would come and rule for a short time, and then the 8th would appear.

So let’s look at the text and see what John is really telling us.

In Revelation 17:1-6, John was shown that the Harlot Roman Catholic Church would rise to power out of the Roman Empire, that she would represent a revival of the Babylonian system of pagan god worship, and that she would be drunk with the blood of the saints.

Of course this caused John to be in awe, as she pretended to be a Christian Church.

The Roman Catholic Church rose to power in 538 A.D., shortly after the last Roman Emperor was removed from power in 476 A.D.

So let’s look at what John is telling us.

Revelation 17:7 But the angel said to me, “Why did you marvel? I will tell you the mystery of the woman and of the beast that carries her, which has the seven heads and the ten horns”

We already know that verses 1-6 are about the Roman Catholic Church, so the explanation in the next verses was given to help John understand who they were.

The first beast of Daniel WAS Babylon, out of which came Satan’s pagan worship system which stole praise from the Father.  They attempted to built a tower to the sky, as if to deny God.

In John’s day, Babylon WAS NOT, for it had been overtaken by the Medo-Persian Empire, then Greece, then the Roman Empire.

John had been shown that the Babylonian pagan religion was still alive and would manifest itself in the form of the Harlot Church.  Roman Catholicism is really the pagan Babylonian religion of Sun and Satan worship, mysteriously masked by the cover of Christianity.  The idols of Babylon became the idols of Rome, which were then given Christian names.

John would have marveled at this grand deception of Satan coming in the name of Christ, so that people would worship a false Christ. The Jesuits, like the Babylonians, are pushing the world into a New World Order, where Satan will be exalted, where man will defy God.

The antichrist beast, the Papal Church, will be judged and delivered unto perdition.

Revelation 17:9 “Here is the mind which has wisdom: The seven heads are seven mountains on which the woman (harlot church of Rome) sits.”

Rome was the great power of John’s day, which is known for its seven hills (mountains) named Aventine, Caelian, Capitoline, Esquiline, Palatine, Quirinal and Viminal.

Interestingly, an eighth hill, Vatican (Vaticanus) Hill, is located across the Tiber river from the traditional seven hills of Rome. After the papacy returned from Avignon, France, in the 1370’s,  Vatican Hill became the headquarters for the papacy.

It was the site of the Roman temple to the Great Mother Goddess Cybele, which had, and probably still does, house secret tunnels under where the Vatican is located, where the secret worship ceremonies of Cybele, including child sacrifice, occur.

Revelation 17:10 There are also seven kings. Five have fallen, one is, and the other has not yet come. And when he comes, he must continue a short time.

King in Strong’s can be translated as ‘sovereign’. Webster’s 1828 Dictionary defines ‘sovereign’ as “A supreme lord or ruler; one who possesses the highest authority.”  So it’s pointing to 8 types of rulers in the Roman Empire, which John would be familiar with.

At the time that John wrote Revelation, five forms of the Roman kingdom had come and gone; 1) Kings, 2) Consuls, 3) Dictators, 4) Decemvirs, and 5) Military Tribunes.

The sixth form of the Roman government was the Imperial head, commencing with Octavian, better known as Augustus Caesar. This form of government existed in John’s day and was in power until the last Emperor was removed in 476 A.D.

During the ‘short space‘ until the 8th head would arrive; the seventh head of the Roman beast was the Dukedom of Rome. Renowned historian Edward Gibbons tells us that Italy was divided unequally between the kingdom of the Lombards and the Exarchate of Ravenna.

John was being told that the Harlot described in verses 1-6, the Roman Catholic Church, would rise to power after the seven forms of government of the Roman Empire.

The Popes of Rome were empowered by Eastern Emperor Justinian in 538 A.D., which was a ‘short space‘ after the last Roman Emperor was removed in 476 A.D.

This is the same message that Paul gave in 2 Thessalonians 2, when he said that the Son of Perdition would rise to power when the ‘restrainer,’ the Roman Emperors, were removed.

Remember, Paul and John had to hide their message, as they couldn’t write that the Roman Empire would be destroyed, as that would have invited more persecution from Rome.

Revelation 17:11 And the beast that was, and is not, is himself also the eighth, and is of the seven, and is going to perdition.

The Roman Catholic Church is the eighth, which came to power when the Roman Empire collapsed and the last Roman Emperor was removed in 476 A.D.

The Popes took the title of Pontifex Maximus, the title of the Roman Emperors, which can be traced back in different forms to the ancient Babylon. The Babylonian Kings served as both king and priest of the pagan Babylonian Mystery religion.

As priests, they bore the title “Pontifex Maximus”  or “Supreme Pontiff,” meaning “supreme pathfinder” or “bridge maker,” representing “the path or connection between this life and the next.” They ruled upon the throne of Satan, which is the throne of Nimrod as the “hidden god.”

This fulfillment matches that of the Little Horn of Daniel 7.  When the Roman Empire collapsed, it was split into 10 civil kingdoms.

Then Satan empowered the Roman Catholic Church to rise to power in Rome, and the Popes caused three of the kingdoms, which would not bow down to their authority, to be removed, plucked out.

This fulfillment also matches that of the Son of Perdition of 2 Thessalonians 2.