This End Times Deception study will focus on Michael Rood, who positions himself as a Messianic teacher.

Some Christians tend to trust Michael because he cites Hebrew sources. Michael claims that one cannot understand the New Testament from Greek, or from a Greek translation.

The irony is that his Revelation prophecy fulfillment explanations are wrong, so apparently understanding the ‘Hebrew’ version of Revelation hasn’t helped him.

I’ve used the Greek and English and I understand it just fine.  That’s proven out on the Revelation Timeline Decoded website.

Who is Michael Rood?

According to a brochure Rood produced to promote his seminars, “Michael John Rood is an ordained nondenominational Christian minister.” His “ordination” is from a cult called The Way International (TWI) required only minor instruction in an unaccredited TWI program.The Way International was a free love cult that was founded by Victor Paul Wierwille, who denied the deity of the Lord Jesus Christ.

Many of Rood’s teachings and practices are drawn from this cult which was widely denounced by Christian leaders and TWI’s ex-followers alike.

Michael Rood rose to fame when he dogmatically and bombastically predicted that the prophetic “Day of the Lord” would begin on the Feast of Trumpets in the fall of 2000. Of course that didn’t happen, so he made excuses.

Should you trust someone who got his education from a cult and who has past false prophecy teachings?

He points to a futuristic one-man antichrist, but the saints have been proclaiming that it is the office of the papacy for 1,000 years; many of them paying for their witness with their blood.

The Protestant Reformers rightly identified that the office of the papacy fulfills Bible prophecy as the Little Horn of Daniel 7, the Son of Perdition of 2 Thessalonians 2, and the antichrist beast of Revelation.

Read Prophecy Points To The Leader Of The Roman Beast

Micheal Rood is not telling you those things, which deflects blame away from Rome.

He points to a futuristic 70th week of Daniel, the supposed 7-year tribulation period.

The concept of a futuristic 70th week of Daniel is a deception from the Jesuits of Rome, who created it to deflect blame away from the antichrist Popes.

There is no future 7-year tribulation period, as the 70th week of Daniel was fulfilled on time, after the 69th week; when Messiah and His disciples confirmed with the Jews (for seven years) that He is the promised Messiah who ratified the everlasting covenant with His blood, as the Passover Lamb.

The seven years ended after the Jewish leaders stoned Stephen to death, marking their final rejection of their promised Messiah. Then the book of Acts clearly shows a dramatic shift, as the Gospel was also preached to the Gentile nations.

Here’s a study series which proves that the 70th week was fulfilled on time, after the 69th week.

He teaches that Jesus ministry was only 1 year long, instead of 3 1/2.

Here’s three events in John where it records that Jesus went to Jerusalem.

At the beginning of Jesus’ ministry, John 2:13, “And the Jews’ passover was at hand, and Jesus went up to Jerusalem“

At the end of Jesus’ ministry, John 13:1, “And before the feast of the passover, Jesus knowing that his hour hath come, that he may remove out of this world unto the Father, having loved his own who are in the world–to the end he loved them.”

In 175 AD Irenaeus wrote an opposing response to Gnostic teachers, who claimed the ministry was one year in an attempt to have it correspond to the pagan zodiac.
(Interestingly, Michael Rood’s calendar is based in part on the Zodiac calendar, and he also needs Jesus’ ministry to be one-year in order to make his teachings work.)

Irenaeus used John 6:4 as evidence to counter the Gnostic teachers, so the passage certainly existed in Irenaeus’ copy of John.  This refutes Rood’s claim that it was added later.

Not only do we have the testimony of Irenaeus in Lyons that the passage existed but P66 and P75, the two most important manuscripts we have of John’s Gospel (both date from about the 200 AD), contain the verse. 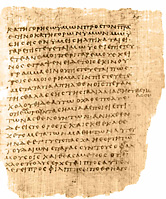 Here’s a link to the P66 where it contains a list of verses that are on the manuscript, with John 6:4 included on the list http://www.earlybible.com/manuscripts/p66-Joh-33.html

Once you throw out Michael’s argument that John 6:4 shouldn’t be included in the Bible, you can clearly see that the book of John mentions three Passovers, which proves that Jesus ministry was more than two years long.

And that destroys Michael Rood’s theory about Jesus one-year ministry.

Also of note is that his teaching is in direct opposition to the Word of God in the 70 weeks of Daniel prophecy, which clearly defines a 3 1/2 year ministry of the Messiah.

It says that the Messiah would appear after the 69th week, in other words in the 70th week, which is 7 years long. His ministry started when He was baptized and anointed, and He began preaching the New Covenant to the House of Israel.

In this video, Michael Rood teaches about the futuristic “confirmation of the Covenant” that initiates Daniel’s 70th week.

This is false teaching, as the covenant of the 70th week of Daniel is the covenant that Messiah came to ratify with His blood as the Passover Lamb.

Here’s more detailed studies on the 70th week of Daniel, which prove that is lasted 3 1/2 years:

The Anointing Of Christ Started The 70th Week Of Daniel

Some of what Michael Rood teaches is true and he makes some excellent points about the Holy Feasts of God, but he has a track record of false teachings, and I would warn people to stay away from him.

Titus 1:10-11, 13-14 warn us, “For there are many rebellious men, empty talkers and deceivers, especially those of the circumcision, who must be silenced because they are upsetting whole families, teaching things they should not teach…For this reason reprove them severely so that they may be sound in the faith, not paying attention to Jewish myths and commandments of men who turn away from the truth“

For the record, I don’t observe Easter, Christmas, Halloween and Sun-day worship.

I observe the Heavenly Father’s seven Holy Feast days which Messiah is fulfilling to redeem His set-apart saints, and I observe the Scriptural Sabbath. I don’t eat pork or shellfish, as our Heavenly Father forbade them because they are unclean animals due to the fact that their bodies are filled with toxins from being scavengers.

I’ve come out of Babylonian-Roman Christianity and on my Come Out Of Her website I expose those man-made teachings.

Rood has continued many of the themes and practices which made TWI theologically a cult of Christianity. http://www.apologeticsindex.org/687-michael-rood

230 thoughts on “Michael Rood Is A False Prophecy Teacher”