This End Times Deceptions Bible study shows that Messiah was born in the fall, not in the winter on December 25th.

Scriptures tell us that Messiah was born six months after John the Baptist.
Luke 1:24-27, 36

Based on the testimony of Scriptures about his Father’s (Zacharia) service in the temple during the 8th course of the year, and that John was conceived after this time of priestly duty, John would have been born around the 14th of Nisan (Passover) or the 15th (Feast of Unleavened Bread)

Interestingly it was John who pointed to Messiah as the Passover Lamb, “and looking at יהושע walking, he said, “See the Lamb of Elohim!”

John never ate bread nor drank wine (Luke 7:33), perhaps symbolizing that leaven nor alcohol tainted the purity of his words.

When we add six months to John’s birth, we arrive at the 15th day of the 7th month, Tishri – the first day of the Feast of Tabernacles.

In the KJV, John 1:14 states “And the Word was made flesh, and dwelt among us, (and we beheld his glory, the glory as of the only begotten of the Father,) full of grace and truth.“

The ISR 98 reads “And the Word became flesh and pitched His tent among us, and we saw His esteem, esteem as of an only brought-forth of a father, complete in favour and truth.”

The word ‘dwelt‘ in the Greek is skenoo from 4636; to tent or encamp, i.e. (figuratively) to occupy (as a mansion) or (specially), to reside (as God did in the Tabernacle of old, a symbol of protection and communion):— dwell.

It is derived from 4636 Skenos, which points to the human body, as Yah became flesh in Yahusha.

skenos skay’-nos; a hut or temporary residence, i.e. (figuratively) the human body (as the abode of the spirit):—tabernacle.

So we have a direct match of Yah becoming flesh through Messiah to dwell among us.

On this day the Jews complete their annual cycle of Torah readings and start again from Genesis.  The circumcision of Messiah at this time indicates how He had come to fulfill the Law and Prophets.

Backing up 9 months from the Feast of Tabernacles would place the time of Mary’s divine pregnancy happening around the time of Hanukkah, the festival of lights, which falls on the 25th of the 9th Biblical month.

John 10:22 shows that Messiah observed Hanukkah, “And it was at Jerusalem the feast of the dedication, and it was winter.”

Messiah declared, “I am the light of the world: he that followeth me shall not walk in darkness, but shall have the light of life.” John 8:12

Hanukkah is the feast of the renewing, or of the renovation. It’s a remembrance of the time when the temple was cleansed after it was defiled by Antiochus Epiphanes.

Messiah came to offer the renewed covenant, the covenant made with Abraham to those who believe in Him by faith; and he ratified the covenant with His blood as the Passover Lamb.

He put aside the temple made by men and created a new temple, with Himself as the cornerstone, the Apostles as the foundation, and the saints forming the building, which the Spirit indwells.

Mary and Joseph were in Bethlehem because of the required Roman census during the Feast of Tabernacles.

King Herod would have chosen the Feast of Tabernacles to perform the census, as Jews would have been gathered in Jerusalem anyway because it was required to attend the feast.

To house the over two million Jews who had gathered for the feast day, there were many booths outside of Jerusalem, for them to observe the Feast of Tabernacles in.

Messiah most likely was born in one of these booths, symbolizing Elohim coming to tabernacle among us.

They used a feeding trough to lay Him in, as they had no cradle. Perhaps this points to Him being the Lamb of Elohim.

The swaddling clothes most likely were the strips of cloth from the garments of priests, as Messiah became our High Priest.

Messiah was not born in the winter, as the Shepherds were still in the fields as the sheep were in the pasture.

“And there were in the same country shepherds abiding in the field, keeping watch over their flock by night.” Luke 2:8

We know that Messiah started His ministry at age 30, during the Feast of Tabernacles.

Messiah celebrated the Feast of Tabernacles, His birthday, on a mountain with three of His disciples.

“And after six days Jesus taketh Peter, James, and John his brother, and bringeth them up into an high mountain apart, And was transfigured before them: and his face did shine as the sun, and his raiment was white as the light. And, behold, there appeared unto them Moses and Elias talking with him. Then answered Peter, and said unto Jesus, Lord, it is good for us to be here: if thou wilt, let us make here three tabernacles; one for thee, and one for Moses, and one for Elias.” Matthew 17:1-4

Peter offered to make tabernacles, the temporary home of the Feast of Tabernacles, for Messiah, Moses and Elijah.

“Then answered Peter, and said unto Jesus, Lord, it is good for us to be here: if thou wilt, let us make here three tabernacles; one for thee, and one for Moses, and one for Elias.” Matthew 17:4

Here is a video from Pastor Mark Biltz called The birth of the Messiah revealed in scripture.

In Deuteronomy 16:16, Yahuah commanded three times for His people to gather in Jerusalem; during His Holy Feast Days of Tabernacles, Passover and Pentecost

He wanted everyone there to witness Messiah’s birth, the Holy Spirit being poured out, and His death. Jewish historian Josephus documented that there would have been around 2 1/2 million Jews in Jerusalem during Messiah’s birth and death.

During the Feasts, they would sing Psalm 118, which pointed to Messiah.

“The stone (pointing to Messiah) which the builders rejected Has become the chief corner-stone. This was from יהוה, It is marvellous in our eyes. This is the day יהוה has made, Let us rejoice and be glad in it.” Psalm 118:22-24

It is supposed by many that our blessed Saviour was born much about the time of this holiday[Feast of Tabernacles]; then He left his mansions of light above to tabernacle among us (John 1:14), and he dwelt in booths. And the worship of God under the New Testament is prophesied of under the notion of keeping the feast of tabernacles, Zec.14:16.

The gospel of Christ teaches us to dwell in tabernacles, to sit loose to this world, as those that have here no continuing city, but by faith, and hope and holy contempt of present things, to go out to Christ without the camp, Heb. 13:13, 14.

and dwelt among us; or “tabernacled among us”; in allusion to the tabernacle, which was a type of Christ’s human nature: the model of the tabernacle was of God, and not of man; it was coarse without, but full of holy things within; here God dwelt, granted his presence, and his glory was seen; here the sacrifices were brought, offered, and accepted. So the human nature of Christ was of God’s pitching, and not man’s; and though it looked mean without, the fulness of the Godhead dwelt in it, as well as a fulness of grace and truth;

in the face of Christ the glory of God is seen, and through him, even the vail of his flesh, saints have access unto him, and enjoy his presence; and by him their spiritual sacrifices become acceptable to God:

or this is observed, in allusion to the feast of tabernacles, when the Jews dwelt in booths, in remembrance of their manner of living in the wilderness: the feast of tabernacles was typical of Christ, and of his tabernacling in our nature. Solomon’s temple, which was also a type of Christ, was dedicated at the time of that feast; and it seems probable, that our Lord was born at that time; for as he suffered at the time of the passover, which had respect unto him, and the pouring forth of the Spirit was on the very day of Pentecost, which that prefigured; so it is highly probable, that Christ was born at the time of the feast of tabernacles, which pointed out his dwelling among us; and is therefore very pertinently hinted at, when mention is here made of his incarnation. However, reference is manifestly had to the Shekinah, and the glory of it, in the tabernacle and temple; and almost the very word is here used. The Targumists sometimes speak of the Shekinah of the word dwelling among the Israelites: so Onkelos in Nu 11:20 where the Israelites are threatened with flesh, until they loath it; because, says the paraphrast, 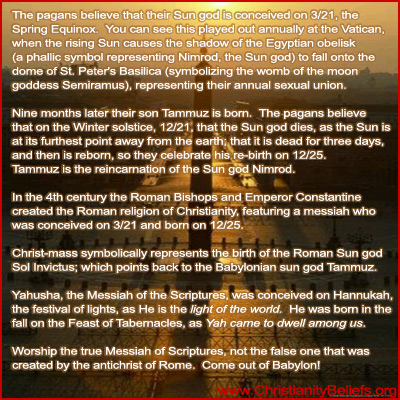